The 31st May 2017 saw another attack on a Merchant Vessel where an RPG has been used, whether the attack was Piracy or Terrorist related is unclear, however this makes little difference to the risks such attacks present to masters and crews and actions need to be taken in order to mitigate the risk and minimize the possibility of loss of life and/or assets. 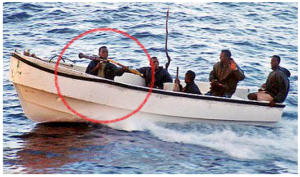 The RPG-7 is a shoulder fired, single-shot, smoothbore recoilless launcher. Grenades are loaded from the front, and the rear of the barrel is fitted with venturi nozzle. Because of the recoilless design, there is a dangerous backblast zone, more than 20 meters making it dangerous to fire from a small skiff. Accuracy is also difficult to achieve when not fired from a steady position and the projectile becomes highly unpredictable. However in trained hands, the RPG 7 can be used to devastating effect and proof of this is the Pasdaran’s naval campaign during the Iran-Iraq war where RPGs where fired from fibreglass hulled Boston whalers .

Why is the RPG 7 a pirate’s weapon of choice?

Recommendations to Mitigate Risks from an RPG Attack

It takes roughly 10 seconds to reload an RPG 7, take this opportunity to raise the alarm to rest of the crew.

Raising the Alarm of an Imminent RPG Attack

Bridge teams should take cover away from the side of the threat, and behind something solid and get as low as possible.

Crew should take cover in pre designated areas away from the side of any threat if possible and be prepared to fight any fires caused by an exploding warhead.