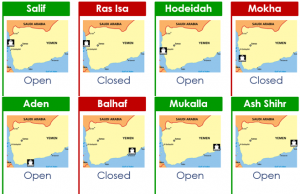 According to well informed sources, the ports of Hodeidah, Salif, Aden and Mukalla are working normally, however the situation in Hodeidah and Aden ports remains tense. The capacity of operating ports may also be limited as some ports are reported to experience prolonged power cuts, unavailability of cranes and may also lack supplies of fuel and other basic services. The situation is, however, subject to change and Members and clients are advised to warn their vessels’ crews and to carry out an assessment of the risks involved prior to entering or transiting Yemeni waters. As vessels calling at Yemeni ports still need clearance from the Saudi Arabian-led coalition prior to entering Yemeni waters, there may be delays related to inspections for entry permissions.
Entry conditions
Yemen’s Ministry of Transport has announced that, after 5 May 2015, shipping companies or owners shipping commercial goods or services to ports not under the direct control of the Government of Yemen (the ports of Salif, Mokha and Hodeidah and associated oil terminals) must notify and apply for an entry permit via UNVIM. The permit application must be submitted upon departure from the port of origin of their cargo and at least five days prior to arrival at their port of destination in Yemen. See notice from the Yemen Ministry of Transport published 2 May 2016 for details.
Vessels calling at Yemeni ports under the control of the Government of Yemen (the ports of Aden and Mukalla) still need clearance from the Saudi Arabian-led coalition prior to entering Yemeni waters, and a copy of the Ministry of Transport’s form “Entry permission for commercial and relief ships to Yemeni ports” should be completed and sent by email to the Operations Unit of the Evacuation and Humanitarian Operations at: yemen.transport@gmail.com not less than a week before vessel’s entry/arrival.
Entry to Yemeni territorial waters will be permitted only following an inspection by the naval forces of Saudi Arabian-led coalition. Once a vessel reaches the outskirts of Bab Al Mandab, some 3nm from Yemen’s territorial waters, a notice of arrival must be called in by the Master on VHF channel 16. The naval forces of the Saudi Arabian-led coalition will then advice where the vessel should anchor pending completion of the inspection and approval of the port entry.
Once the vessel is allowed to enter port, the Master must register the vessel’s arrival with the port authorities (on VHF Channel 14 or 16) and will then be assigned an anchoring position until the berthing time is confirmed by the Harbour Master.
Recommendations
Vessels calling at Yemeni ports are advised to take note of the above vessel clearance procedures and well before arrival, clarify the status of a port’s services as availability of cranes, fuel, manpower, etc. may be limited.
Since the political situation in Yemen remains volatile and advice concerning port security and operations may change rapidly, it is important to make frequent checks with local sources of information, e.g. vessel’s agent, Gard’s correspondent, etc., to obtain the most up to date and reliable security information available at any given time in order to assess the current security situation prior to entering Yemini waters. Gard Alerts of 30 January 2017 and 14 October 2016 provide information and guidance on Red Sea/Gulf of Aden transits. Vessel operators are advised to follow recommended best practices (BMP4) for registering with the United Kingdom Maritime Trade Operations (UKMTO) and Maritime Security Center Horn of Africa (MSCHOA)/European Union Naval Force (EUNAVFOR) when operating in this area.
Source: Gard (http://www.gard.no/web/updates/content/21546083/gard-alert-yemen-port-situation)